I admit that when I first heard of the collaboration between The National’s celebrated frontman, Matt Berninger, and Brent Knopf of Ramona Falls and (formerly) Menomena fame, I was ambivalent about it. First of all, I had no clue who Knopf was (a tragic mistake…I know) and although I adored Trouble Will Find Me, I wasn’t a diehard National fan. I was also knee-deep in jazz, americana, and roots music and had no room on my iPod or in my heart for anything that didn’t transport me to a time when the best thing really was sliced bread. But the spell has been broken, my friends, and holy hell is this stuff good.

Berninger once called Return to the Moon an “accidental concept album,” and it is easily one of the most cohesive records I’ve listened to in a long time. In a musical age driven primarily by singles and the quest for the next big “hit” this is an album to listen to in its entirety with all the songs in order. Of course, the tracks can and do stand alone, but together they offer a rich tapestry of expertly woven melodic motifs and personal narratives. It’s edgy and contemporary, with moments that evoke some of my favorite artists from the ’80s (Berninger and Knopf both share a love for the music of this decade). Some are more referential than others—“Silent Ivy Hotel” has moments that sound distinctively Elvis Costello inspired, and you can hear Knopf’s love for Depeche Mode clearly in “Sad Case,” yet they never sound contrived.

And man, does Knopf have layering down…I find myself listening to this on repeat and digging into every bit of it. One of his greatest strengths lies in his ability to balance a myriad of different elements: the vocals, electronic, acoustic, and atmospheric all work together in a synergistic arrangement that is deeply appealing. Knopf likes to hit his listeners with a wall of sound, and processing all the notes can be overwhelming. There is, however, even in the most chaotic moments, a sense of organization that grounds the listener. The result is fascinating, complex composition that isn’t overly complicated: all of the tracks, and the entire album for that matter, swirl with endless patterns arranged in brilliant and unexpected ways, yielding an intellectual listening experience that becomes more compelling with every repeat.

At the same time, Knopf’s compositions exude a playfulness that saves it from becoming tiresome or overbearing. Ornaments in the upper registers of the piano or keyboard add a levity to heavier electronic arrangements while the inclusion of acoustic guitar adds an organic quality to the tracks. Throughout the record, there is an exuberance that lends a balance to the album and is completely addictive.

Add to that Berninger’s broody baritone and evocative lyrics and you have tracks that will keep me entertained for hours. I’ve always been a fan of his songwriting—he has this incredible ability to mix moody melancholy and brutal honesty with a side of light humor and razor-sharp wit. All of this is perfectly demonstrated here: his writing is clever, sensitive and stimulating and the whole album rings with bitter truths and ironic narratives. This is most evident in “I’m the Man to Be,” where he pulls no punches and delivers uncomfortable hotel-room-confessions in a stream of consciousness style that manages to be poignant yet blunt. In a way, the entire album feels like the diary of a touring musician (Berninger wrote a good chunk of it while touring with The National), and the lives and inspiration of musicians dominate through references to Berninger’s musical heroes, as well as the album’s principle “characters” Didi and Michael (based on the Minutemen’s D. Boon and Mike Watt) playing in what Berninger has described as a “punk rock musical”. The songs themselves sway from the almost comical melodrama of “Need A Friend” to the utterly beautiful and emotional “No Time to Crank the Sun” with ease and humanizing, relatable, moments.

Naturally, picking favorites among the tracks is tricky. There honestly isn’t a bad one on the album, but “Sad Case” and “Happiness, Missouri” are epic on the music front with an ingenious transition between them, while “Sleeping Light” offers a lush sonic mosaic that I want to groove to all night long. But if you were to put a gun to my head I might have to choose “Careless” as the true winner: serving as the perfect (tormented) love song with brilliantly crafted lyrics that are simultaneously witty and heart-wrenching. This song, more than any other nails the balance of electric, acoustic, and atmospheric all at once with a gentle, rocking rhythm that enhances it’s longing undertones.

As a side note, seeing these guys perform live in Paris and Dublin, I was struck by how well this music (which could have fallen flat) translated to the stage. Berninger and Knopf were joined by Matt Sheehy of Lost Lander and Wye Oak’s Andy Stack for a phenomenal live performance. The four had a remarkable rapport onstage and they knew where to edit on the music front, delivering songs as rich as their album counterparts with spontaneity and originality. All this heightened by a gorgeous lighting display (Knopf’s brainchild) as well as Berninger’s witty banter and on/off-stage antics.

I suppose that what I like best about this record is that it is endlessly engaging. It feels current, yet there’s a progressive and complicated quality about it that makes me want to keep listening. It’s the sort of album I know I’ll be revisiting for years, constantly discovering little riffs I didn’t initially catch or looking for new meaning in Berninger’s evocative lyrics. The two make a superb team—complementing the other’s strengths and editing each other seamlessly. Brent Knopf’s compositions, all crafted and layered in a heady way, balance out the more raw narratives that Matt Berninger brings to the table and the instrumentation’s buoyancy also helps elevate his broody musings. Compatible contradictions fill the tracks, and as a result it is one of the most exciting and contemporary albums I’ve heard in years. I have often felt that I was born too late and missed music’s best decades, yet Return to the Moon gives me hope and offers a surprising and utterly logical step forward for music.

So when Berninger apologetically shouted there would be no encore at the end of their set—we would have to wait for the next album to hear more—there was a general feeling of anticipation and sadness in the room. Count me in…let’s hope it comes soon. 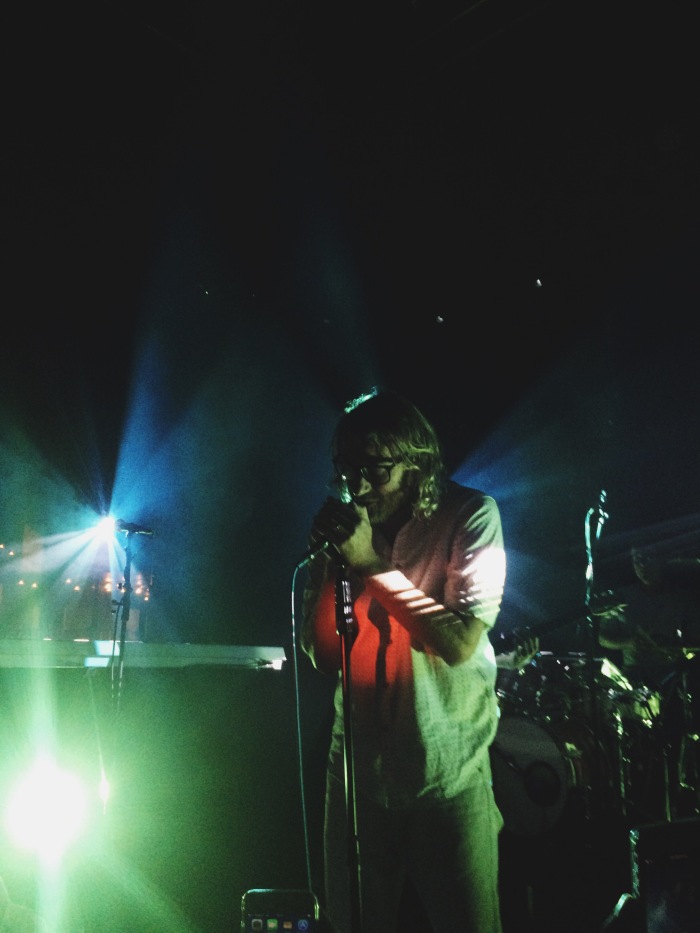 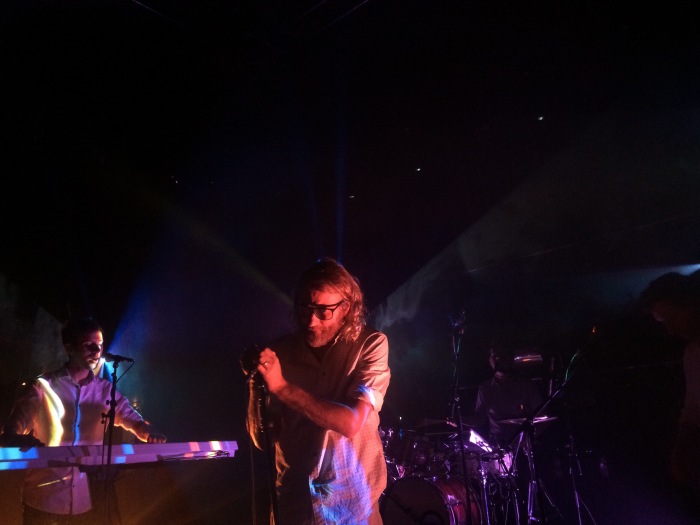 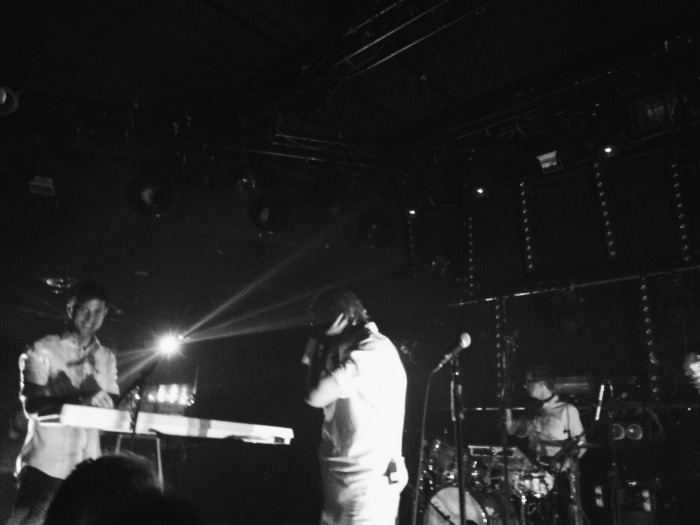 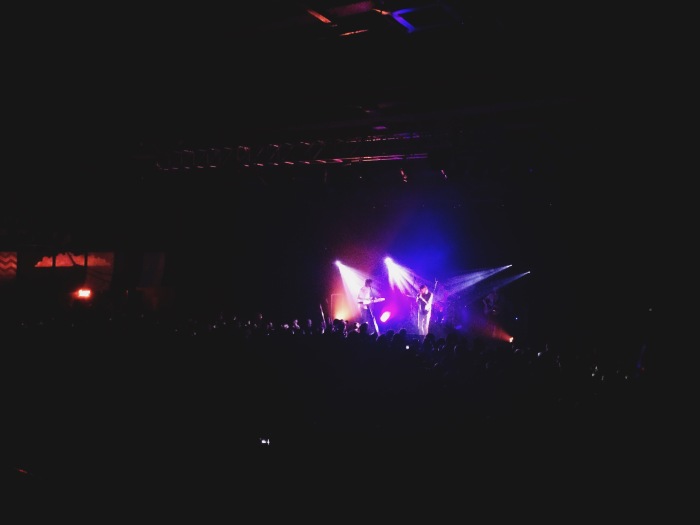 2 thoughts on “The band to be: EL VY’s Return to the Moon”